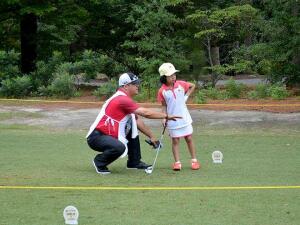 Nearly 1,400 of the world’s best golfers converged on the Village of Pinehurst and the Moore County area in late July for the largest and most prestigious golf tournament in the world.

The best golfers ages 12 and under, that is.

The home of American golf played host again this year to the U.S. Kids Golf World Championship - the premier junior tournament for pint-sized golfers, in its 8th consecutive year in the Pinehurst area.

The two World Championship weeks kicked-off with special events including the Teen Skills Challenge and the Parade of Nations on July 29 through the Village of Pinehurst. The parade has become a highlight for the participants as well as the residents of the Pinehurst area.

The Championship rounds took place July 31-August 2. The top 16 finishing 12-year-old boys and girls formed two teams (United States vs. International) for the U.S. Kids Golf World Cup on August 3, which was played on Pinehurst No. 4.

In the end, the United States edged their international counterparts and claimed the World Cup for the ninth consecutive year.

The 2012 World Championships were the subject of the full-length documentary The Short Game. Camera crews were on site again this year, reportedly filming for a new reality TV series.

According to The Pilot, the impact of the championships on the local economy nears the $7 million mark.