*Editor's note - After a victory in the semifinals on March 3rd, Curt Shelvey has advanced to the Final Round of 'Fire in the Triangle,' scheduled for March 9th against Ryan Conklin of Rex Health. Best of luck to Curt in the finale!* 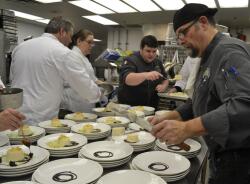 Moore County, known regionally for its great dining and wide variety of high-end restaurants, has a new culinary bragging right. Southern Pines chef Curt Shelvey has advanced to the second round of the "Got to be NC" Triangle Dining Competition.

The "Got to be NC" Competition Dining Series invites 16 chefs from around the Triangle to compete head-to-head in an Iron Chef style dining battle. Each chef prepares three courses that revolve around a featured NC ingredient, which is revealed to the chefs and their team the day of the competition. Ticketed guests, along with local culinary experts, score each of the six courses based on criteria such as presentation, flavor and creativity to determine the winner. The eventual Triangle champion will face-off against other NC champions from Wilmington, Charlotte, the Triad and Asheville. 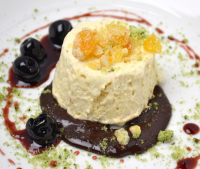 Cowden led Shelvey by two-hundredths of a point after the appetizer and main course round, but Shelvey brought home the win with his dessert - Baker’s Peanut Butter Semi-Freddo, Red Wine Cherries, Dark Chocolate Espresso Sauce, Peanut Brittle and Basil Sugar.

Another Southern Pines chef, Rhett Morris of Rhett’s Restaurant, was knocked out in the first round Monday by Spencer Carter of Weathervane in Chapel Hill.

Shelvey will take on Chelsi Hogue of Ed's Southern Food & Spirits in the Quarter-Final round on Feb. 16. Tickets are still available for the six-course, interactive dinner on the Competition Dining website.

Photos courtesy of The Pilot and Competition Dining NC.