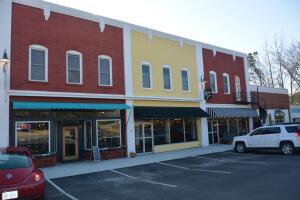 Back in the day, a daughter of Vass’ first doctor opened up a millinery shop on the main road leading into town. A nearby wooden bridge carried horse and carriage traffic past the corner building, bringing her what we can assume was a steady stream of customers at the turn of the century.

Today that bridge is broader, and the current of travel is stronger and swifter of late, with a noticeable influx of military families mixing with descendants of early farmers and long-settled folks.  Yet, the building on the corner lot fell into neglect.

Located on Main Street in Vass, the 1900s-era building was expanded several times and housed many businesses through the decades.  Enchanted with the building’s history, Beth Dent and husband Daniel jumped at the chance to purchase the property.

With the building’s 7,000 square feet of retail area downstairs and another 4,000 square feet of apartment space on the second floor, the Dents had their work cut out for them with its renovation, spending nights and weekends transforming the property.

More than a renovation, the Dents wanted to honor the building’s historical character. Punched tin was installed over new fire safety ceilings, and exposed brick was left in place, where possible.

The centerpiece of their project is Main Street Commons, a 2,600-square-foot social venue space for weddings, rehearsals and other special events. Built in the former mercantile, the room is rustic and elegant, with Victorian chandeliers alongside industrial accents and reclaimed wood furniture.  The main room has an area for a DJ or live band, with a seated dinner capacity for 120 people.

“We wanted to keep the warmth and the wow,” Dent said. “We recreated what the old storefronts would have looked like to bring back the personality of the building. We tried to hold on to the old boards and reuse them where we could, and also to put back in little pieces of history from Vass. We could not rebuild exactly historically accurate, but what we created is a modern, safer version. You get the feel of how it would have been.”

That passion for the past continues to resonate through each of the other restored spaces, which have attracted an eclectic mix of local entrepreneurs.

Buggy Town Coffee sits on the busiest corner of the building and is the second location for the Carthage-based business. Four local military families who make Vass their home joined forces to bring this coffee shop to town.

Tucked behind the coffee shop, just around the corner, the irresistible smell of baked goods greets you at the door of Main Street Sweets, owned and operated by Mary Blackhorse and Diane Patenaude. Both women were transplants to Vass, as military spouses, but have made the town their home.

Back around front, a door to right of the Main Street Commons event space is another storefront where inventive minds are hard at work. Creative Studios NC is the brainchild of three local artists with “entrepreneurial tendencies,” said co-owner and military spouse Jan McClay.

Right next door, the entrepreneurial spirit runs in the family for mother/daughter team Brooke and Angie Kelly of Make It Happy, a custom home furnishings enterprise.  The space also came with a surprise family tie. Brooke’s grandfather attended fifth grade on the second floor of the building, years ago after the Vass School burned down.