Torn between the small-town yearnings of her youth in neighboring Richmond County and the up-tempo lifestyle of her collegiate, intern and early career days in North Carolina’s Triangle area, it was only natural that Fallon (McIver) Brewington’s destiny would land her in the ideal spot somewhere in between – Moore County. 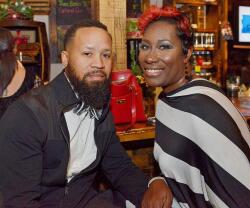 As the new CEO of the Boys and Girls Club of the Sandhills in Southern Pines, Brewington is poised to make a real impact in the region. She and her husband Chance, who is former military, and their two children Brianna and Jaiden have settled nicely into the community.

Brewington grew up in Richmond County and moved to Durham to finish high school at the North Carolina School of Math and Science.  She then went on to graduate from NC State University in Raleigh.  She says that while living in the Triangle area she got used to having a lot of places to go and things to do.

“However, I also still longed for the small-town nature where everyone knows or is connected to each other in some way,” she says. “I wanted that sense for my children, so I made the decision to move back to Richmond County while my husband was in the military to ensure we had family support and that environment while raising our daughter through multiple deployments and duty stations.  We got used to larger areas but being in our age range and with two young kids after he finished his military service, we longed for places to hang out with the kids.”

Not surprisingly, the Brewingtons “found ourselves in Moore County every chance we had when we lived in Richmond County, so naturally it was the first and only choice when I took the new position in Raleigh.”

Brewington started working for Communities In Schools of North Carolina based in Raleigh but it was a long commute.  Her husband was employed at CSX Railroad in Hamlet.  It was ultimately the contrast of small town versus big city that helped shape her vision for what she and her family really needed.  And Moore County was the perfect compromise.  “Moore County was the right choice for both of our careers,” Brewington says.  They closed on their home in Aberdeen just two days before Christmas in 2014.

“I really love the diversity,” she says. “I meet a lot of new people from all over the world who have come here through military, vacationing or retirement. I also meet a lot of people who have just moved here because they have friends who told them how cool this area is.  It’s a great place for all ages and I love that my age group is doing more and more to meet and socialize here.”

Her kids have had opportunities in Moore County that they might not have had otherwise.

“My daughter was able to take advantage of the Boys & Girls Club here as soon as she was in middle school,” Brewington explains. “She’s also attending a wonderful public charter school that fits her personality and interests (STARS – Sandhills Theatre Arts Renaissance School).  My son also attends there as well after having attended the best preschool (Country Kids Preschool), which I learned about from meeting locals here. My son has a natural talent for golf and being here has allowed him to grow that with The First Tee and now we will be looking to U.S. Kids Golf.  Aberdeen Parks and Rec (Recreation) has also been wonderful.  If we need to travel outside for anything then we don’t have to travel far.”

Brewington was introduced to the non-profit sector when she was an intern at the State Employees’ Credit Union while at NCSU. She has been in the non-profit world ever since. She worked her way up to Vice President before deciding she wanted to be in education.

“I got my Master’s (in vocational education at East Carolina University) and left for a position at Fayetteville State University’s Small Business Technology Development Center before I arrived at Communities In Schools as an Executive Director.  From there it was on to the State Office in Raleigh.  Now it’s the Boys & Girls Club, which has a very similar mission and goals for kids so it was a natural move. I am also pursuing a doctorate in education at N.C. State.”

The Boys & Girls Club of the Sandhills recently marked 20 years in Moore County and celebrated with an Anniversary Gala.  As she matures into her new role with the Club, Brewington promises to build on the “Work, Play, Give” tag line that is used by Moore Young Professionals.

“I think that embodies what this county offers,” she says. “It's a great place to live no matter what stage of life you're in. There's plenty to do.”

Brewington has several favorite places she likes to hang out. They include:

*The House of Fish

“But,” she adds, “We’re not lushes, I promise. We just love craft beer and the craft beer community.  Honestly, I have met our closest friends here at the majority of those places.”