I first visited Southern Pines when I was living in Lumberton, a town of about twenty thousand in rural Robeson County. My time as a reporter there was rewarding—I met earnest people and learned a lot—but I'd be lying if I said it was an exciting place to live. So, my significant other and I would go to pretty great lengths to seek out something to do. We'd hit up Columbia for concerts, Wilmington for the weekend, Fayetteville to grocery shop. 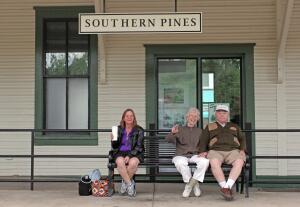 And Southern Pines to treat ourselves.

It was in that spirit that we took the hour-and-half train ride from Raleigh for a recent weekend trip.

When you think of Southern Pines (if you ever have), you probably think of golf and ladies with sweaters around their shoulders. You would not be wrong.

There's also a lot of good food, a top-notch beer store, and a surprising amount of crunchy-granola people. In addition, Southern Pines is home to a Creation Museum that's really just a collection of tools, taxidermy, and Bible verses, and the North Carolina Literary Hall of Fame, but I didn't get to see those things, so you'll have to Google them yourself.

Southern Pines is a quintessential small Southern town. It's both preppy and down-to-earth—the kind of place where you're definitely going to hear "Wagon Wheel," but it'll be the original version. Being there is like being in this bubble where the grass is always trimmed and everything is clean and shaded by a big magnolia tree. It's a bit like Disney World in that way, only the storefronts are real, the beer is cheap, and everyone says hello to you because they're genuinely nice people, not because they're paid minimum wage to do so.

We took the Silver Star from Raleigh's old train station on a Friday night, the last weekend of operation before Union Station opened. The train was late (I'm told this happens often), so we arrived at the station in downtown Southern Pines—restored to its original 1898 glory—at about midnight. We were staying about a block away at the Jefferson Inn, which opened in 1901. There was live music in the lobby bar and a crowd in the courtyard, but we couldn't hear a thing from our second-floor room.

Without a car, we managed to spend our trip within about a half-mile radius of the hotel. With a car (and better weather), we might have ventured to the farmers market, hiked in the nine-hundred-acre Sandhills Nature Preserve, or visited the Southern Pines Brewing Company taproom.

I started Saturday bright and early with warm yoga at Hot Asana, which is above the historic Sunrise Theater, a space for plays, music, and independent films. The class was luxurious; for just $15, the sixty-minute practice also came with a quick shoulder massage.

For breakfast, we headed down the street to Betsy's Crepes. They've changed the menu since we last visited, eliminating our favorite, a mix of sautéed apples, brown sugar, and cheddar cheese called the Oo La La. We recreated it as a "build your own" crepe—just make sure you get that with the cinnamon-flecked Hungarian batter. There are also savory, gluten-free, and non-crepe options.

Our next must-see was the Country Bookshop, which has been open since 1953 and is now owned by the local newspaper, The Pilot. I love walking into this place. It's cool and crisp with the smell of brand-new books and little soaps for sale in between. The book covers are dotted with yellow Post-Its bearing handwritten employee reviews.

I love, too, that there are chairs scattered throughout so you can plop down whenever something catches your eye. I love that purchases support a local bookstore and a local newspaper. I love that John McPhee's The Control of Nature was on the shelf marked "Required Reading for School." (I say was because I took the last copy home, along with a Margaret Atwood missing from our collection and Action Bronson's cookbook).

Downtown is just a few blocks, but there are enough shops and restaurants to keep you occupied for an afternoon. We perused the kitchen gadgets and bath products at Green Goods, which stocks recycled and natural items. At Swank Coffee Shop, which also sells locally made jewelry, clothes, and salves, I had my first golden latte—a savory blend of espresso, almond milk, coconut oil, turmeric, cinnamon, and black pepper perfect for the drizzly weather.

For lunch, we went to Southern Whey, a cheese shop with local products and spectacular grilled cheese sandwiches. The shop is decorated with concert posters and chalk drawings. The visual stimulation continues to the (gender-neutral) bathroom, which is covered wall-to-wall with stickers and photos, like a cutout of Matthew McConaughey perched at eye level directly across from the toilet.

Anyway, the sandwiches. There's a selection of cheeses, meats, locally made bread, and housemade extras, like spicy plum jam, to mix and match. Overwhelmed by the options, I panicked and ordered pimento cheese and pickles on sourdough (what?), but it turned out creamy, tangy, crispy, and delicious. My S.O. got crusty prairie bread with speck, hot peach chutney, hoop cheese, and cheddar and was silent until finished.

We took a short walk to the Southern Pines Growler Company, a welcoming, no-frills bottle shop with a rotating selection of thirty beers on tap. The proprietors are just as happy to help a novice navigate the menu as they are to discuss the politics of beer distribution in North Carolina (guess which one we were). They take special care to stock North Carolina beers, even driving to Durham for Fullsteam and Ponysaurus.

Following an afternoon of catching up with old friends from our Lumberton days, a second trip to the bookstore, and a failed attempt at the Creation Museum, which was sadly closed, we headed to the Leadmine for cocktails and Korean fusion.

The place opened last year as a needed middle ground between pubs and sandwich shops and formal restaurants. Dimly lit with an industrial look, the Leadmine feels more like New York City than small-town North Carolina, except the ceilings would be two feet lower and the cocktails $4 more expensive in the Big Apple. Fair warning: The portions were way bigger than we expected. Another fair warning: We both ended up sick after the meal, but we're not sure of the culprit.

We started with maple and mustard brussels sprouts. They were slightly burnt, sweet, sticky, and dolloped with tangy mustard made with Southern Pines Brewing Company's Man of Law IPA. Next, we tucked into pillowy bao buns, mine with tempeh, his with bulgogi, and both packed with cilantro, kimchi, and crunchy cucumbers.

For drinks, I ordered a Russian Donkey, a refreshing mix of whiskey, ginger beer, mint, and lime. He got the signature Leadmine, made of bourbon, lemon, activated charcoal, and egg whites. It was creamy, light, balanced, and, yes, black. While both were good, we agreed the Leadmine was better and ordered another round, which suffered from too much gritty charcoal. The bar stocks thirty bourbons plus a couple dozen other whiskeys if you prefer a neater drink.

Early the next morning, not one person or car passed by as we walked the 423 feet from the hotel to the train station. The town was silent. Southern Pines was still a treat—as it was when we used to visit desperate for things to do—but this time the treat was slowing down.

Naturally, the train was late.

Article reprinted from Indy Week -  "Within a Half-Mile of Our Hotel, the Quintessentially Southern Southern Pines Offered an Idyllic Weekend Getaway" by Sarah Willets 7/18/18.