Hearts are big and the Christmas spirit is strong when it comes to the Project Santa bicycle giveaway that takes place annually on Christmas morning in Moore County.  Project Santa embodies the essence of Christmas and brings so many people in the community together each year. 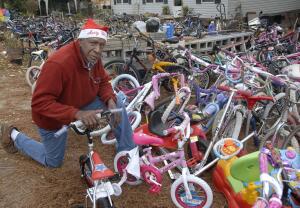 What started as a side project with just 17 bikes more than 20 years ago is now a way of life for Earl Wright, 63, known as “Mr. Earl”.  Just a few weeks after Christmas, Wright starts preparing for next year’s giveaway and collects used and new bicycles throughout the year.  He often scouts out yard sales and looks for bargains in the community. Project Santa also collects cash donations that are used to buy replacement parts — basics like tires and inner tubes, springs, brakes and seats — and he looks for volunteers to help in the workshop with refurbishing projects and to drive trucks to pick up donations and haul the bikes before dawn on Christmas morning.

“We have a lot of bikes that need to be taken apart, and then we will put them back together like new,” Wright says.

Last year the group provided more than 1,350 bikes to hundreds of children, some who with their parents were lined up hours before the giveaway opens at 8:00 a.m. Christmas morning in Southern Pines.  Kids come from Fayetteville, Lumberton, Sanford and elsewhere, but there are no questions asked.  The only requirement is that children receiving bikes are asked for a three-can food donation which teaches, Wright says, “You have to give something to get something.”  Any leftover bikes are then transported to Robbins for a second giveaway.

Wright spends Christmas day wearing a Santa suit, dashing around the parking lot, greeting families, directing volunteers, and answering questions with, “Wonderful, wonderful … I do it all for the children.”

Wright, a sharecropper’s son, never owned a bike when he was young because his family simply could not afford to buy one for him.  But he knows that owning a bike is a milestone, especially for children from low-income families. He learned mechanics repairing farm equipment.  It is those boyhood yearnings that have steered his philanthropic work in Moore County.

Mr. Earl’s devotion to children, expressed with a gruff kindness, has earned him recognition. In 2014 he received the North Carolina Governor’s Award for Volunteer Services. Then, in September 2017, Wright was named Man of the Year by the Moore County Community Foundation.  “I don’t know why,” he modestly says. “I was shocked. Lotta people do much more.”

He has sworn to retire at 65. “My knuckles are busted up. But when I look around on Christmas day and see those kids -— it’s so sweet. That’s what makes me do it.”

Anybody who has attended the bike event understands why he does it year after year. Bystanders watch, holding back tears, as little faces light up.  As one volunteer described, “There’s just no better way to spend Christmas.”