Pine Needles Lodge & Golf Club in Southern Pines has been selected by the USGA as the host site for the 77th U.S. Women’s Open in 2022.  Pine Needles will become the first course to host the Women's championship four times.  The championship, considered the ultimate test in women’s golf, will be held June 2-5. 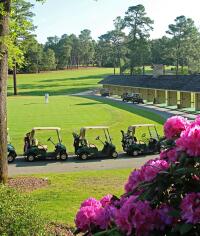 “We are thrilled to bring another U.S. Women’s Open to one of the most respected courses in the United States,” said Stuart Francis, USGA Championship Committee chairman. “Three great USGA champions have conquered the ultimate test in women’s golf at Pine Needles, and we look forward to adding the 77th U.S. Women’s Open champion to that illustrious list.”

“Pine Needles is, if not my favorite U.S. Women’s Open venue, it’s in the top three,” said Webb, whose 2001 victory was her second straight Women’s Open title. “Pine Needles [in 1996] was my very first U.S. Open I ever played in, and then when we went back in 2001, I was so excited to be there as a defending champion. Obviously, it was a special week where I played fantastic golf at a tremendous golf course. I’ll always have special memories of Pine Needles.”

Designed by Donald Ross and opened in 1928, Pine Needles was renovated in 2004 by John Fought, who oversaw the restoration of greens and bunkers to their original forms with the aid of vintage aerial photos. In the summer of 2016, Kyle Franz was brought in to assist with a green rebuilding and bunker restoration project that aimed to maximize hole locations. The club, which was owned by women’s golf advocate, renowned instructor and LPGA Tour charter member Peggy Kirk Bell from 1953 until her death in 2016, also hosted the 1989 U.S. Girls’ Junior and 1991 U.S. Senior Women’s Amateur championships.

“To host the most prestigious event in women’s golf for the fourth time speaks to our longstanding relationship with the USGA, and we’re honored they accepted our invitation to host the Women’s Open in 2022,” said Kelly Miller, president and CEO of Pine Needles. “The Donald Ross-designed course has already crowned three memorable Women’s Open champions, and we’re confident it will again be a welcoming yet challenging host for the world’s best players. I can only imagine how happy Mrs. Bell would have been to host another Women’s Open.”

Bell is largely credited with being the driving force behind Pine Needles hosting its first three U.S. Women’s Opens.