How exciting that the 2016 U.S. Olympic Women's Gymnastics Team brought home the gold!  For one team member, her journey to the Olympics included training time in Moore County.

A native of Hamlet, in neighboring Richmond County, Ashton Locklear was one of 14 female gymnasts to qualify for the U.S. Olympic Trials, where she was selected to travel to Rio, Brazil with the team as an alternate. 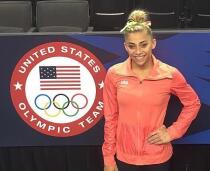 From 2003-2006, Ashton could be found training at Sandhills Academy of Gymnastics in Aberdeen.  Even at this early age, she already knew she wanted to be an Olympic gymnast.

Ashton started at Sandhills Gymnastics when she was 5, already dedicating more than six hours each week to training. That’s where she first began competing in the four disciplines of artistic gymnastics: floor exercise, balance beam, vault and uneven bars, which is now her specialty. The same year, she won a rookie-level state tumbling championship.  “We put up her state championship banners in our gym," said Jennifer Ayars, owner of Sandhills Gymnastics.

“She definitely had talent and potential,” said Ayars.  “Ashton was willing to try anything, especially if it had anything to do with flipping,”

Today, Ashton, 18, is a senior elite gymnast and is considered one of the best in the world on uneven bars, winning 5 gold medals since 2014, including individual gold at the Pacific Rim Gymnastics Championships this year.

“She’s so strong on bars,” said Ayars. “When they score they have what’s called difficulty points and she has the highest of all the gymnasts in the United States and she does it so cleanly.”

Since age 11, Locklear has trained at Everest Gymnastics in Huntersville, traveling frequently to and from her home in Hamlet.

Even though Ashton, as an alternate, was not able to compete in Rio, and she hasn’t been in the spotlight as much as her Olympic teammates, she’s still a local celebrity, role model and inspiration to all, particularly to those who may have Olympic dreams.  It wouldn’t be surprising to find that there may be talented others here in Moore County who could be future Olympic stars in the making!