The developer of a massive new mixed-use development spoke before a group of key Moore County business leaders on October 27th, outlining plans for a sweeping project, Morganton Park South, that could be transformational for southern Moore.

“In one of the worst kept secrets in Moore County, yes, a Target is officially coming to Southern Pines,” said John Silverman, managing principal and co-founder of Midland Atlantic Properties, developers of large-scale commercial properties across the U.S. Silverman was the keynote speaker before a group known as Moore 100, a membership-based group of Moore County Partners in Progress Economic Development.

At the Moore 100 meeting, Silverman detailed the size, scope and some of the retailers expected to occupy the retail complex. The development, expected to be done in phases, also includes apartments and has space set aside for offices and other development. Construction is set to begin next week.

Original plans for a smaller Target are gone; the new store is now scaled up at 149,000 square feet. By way of comparison, that’s about twice as large as the Harris Teeter at the Pinecroft shopping center in Taylortown.

A new DICK’S Sporting Goods location and the region’s first Golf Galaxy will be the initial tenants to open in the spring of 2024 — “to be ready for the U.S. Open,” Silverman said. Other retailers such as HomeGoods, FiveBelow and a large Starbucks with a grassy courtyard directly outside will follow. Target is aiming for an October 2024 opening.

Silverman spent about 30 minutes speaking about the Morganton Park South project in Southern Pines, to be located off U.S. 15-501 and Morganton Road.

The overall site, which will take on a town square appearance, will include more than 268,000 square feet of property and boast water features, wide sidewalks, smaller glass paned windows, “lots of wood and similar brick to what is used in downtown Southern Pines,” and horse fences running aside parts of the park-like setting.

Prior to Silverman’s presentation, Natalie Hawkins, executive director of Partners in Progress and Adam Kiker, one of LKC Engineering’s principals, addressed the Moore 100 group gathered at the Carolina Hotel in Pinehurst.

Silverman spoke about himself and his career before speaking directly about the development. His company has developed more than 50 shopping centers. Midland Atlantic Properties has developed 11 projects in North Carolina, notably Southpoint, an award-winning 325-acre project in Durham, NC.

Silverman mentioned that the Morganton Park South project is “an $80 million dollar investment in this community.” 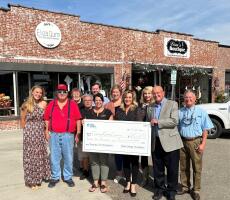 Historic Buggy Building, Carthage While much of the area surrounding downtown Carthage is in the midst of moving and groovin’, the downtown area itself has been in what seems a perpetual holding pattern. But hold onto your beer mugs, because Southern Pines Brewing is planning on movin’ and brewin’ into the town’s iconic Buggy Building. After decades of disrepair and ... Read More »