Craft beer breweries are no longer found just in trendy urban areas.  Moore County is plenty “hip” as the home of three and soon-to-be four microbreweries where local flavors intertwine with time-honored traditions.  Railhouse Brewery in Aberdeen, Southern Pines Brewing Company, the Pinehurst Brewing Company and Hatchet Brewing Company opening this summer know they are in the right place. 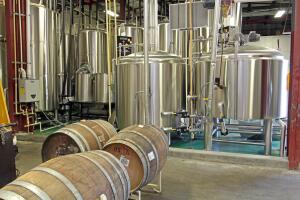 Scheduled to open this August, Hatchet Brewing Company is a concept developed two years ago by friends and veterans Greg Walker and Mike Carey.  The name “Hatchet” is a reference to Walker and Carey’s military service, and work is progressing on their location downtown on SW Broad Street in Southern Pines.  The brewery will feature a glass front wall to showcase the brewery’s tanks, a curving interior wall, and indoor and outdoor seating areas.

This time of year sees our other local breweries working on new brews such as fruit-infused creations.

Railhouse Brewery in Aberdeen continues to make their seasonal beers, but this year they are also working on some limited-release beers.

Their first limited release is a cherry pastry sour called Madame Cerise, described as a “big fruity beer with a touch of tartness.”  It is not so dissimilar from Community Blues, a collaborative effort between Railhouse, Southern Pines Brewing Company and Pinehurst Brewery, that has characteristics of a blueberry doughnut, while the Madame Cerise has a cherry pie flavor profile.

A few miles up U.S. Highway 1 is Southern Pines Brewing where the spring seasonal Hefeweizen, fermented with grapefruit puree, has proven so popular it will soon be a year-round offering.

Fellow veterans Micah Niebauer, Jason Ginos and John Brumer, who served together in the 3rd Special Forces Group at Fort Bragg, opened Southern Pines Brewing in August 2014.  Today they have ramped up to 500 barrels a month for statewide distribution.

They will soon be issuing a new limited release — a not-yet-named rum barrel-aged imperial pineapple thief that is described as tasting like a “pina colada.”

The Pivot, a hazy New England style IPA is their most popular brew, but they are always looking for new ideas from customers.  They have already added about 60% more fermentation capacity since opening.

Last but not least, the Southern Pines Growler Company can’t be overlooked as part of the local beer scene.  Founded in 2013 by Brandi Underwood and Gerry Bateman, Southern Pines Growler focuses on serving fine craft beers with 30 taps and over 100 bottled varieties mostly from North Carolina breweries, but there is also a good mix of highly-rated national and international beers.

In addition, they offer a home-brewing supply shop that has recipes, grains, hops, liquid yeast as well as the brewing, bottling and kegging equipment.  They even teach brewing classes.

As a result of the booming craft beer industry, Southern Pines Growler is expanding from its current 3,000 square-foot space into a new 3-story building in downtown Southern Pines, just one block south of their present location.  SPGC touts that everyone is welcome in their establishment – even dogs!

Locals and visitors alike just seem to have a palate for Moore County’s handcrafted ales and lagers which is why the craft beer scene is so popular here.  You don’t have to live in a big city to enjoy this thriving niche industry!