On the heels of the article about the upcoming Epicenter music festival, music is also at the heart of resident Paul Murphy’s story. 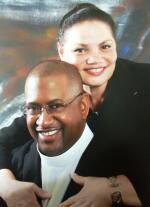 The Reverend Dr. Paul Greene Murphy’s story is more like an epic novel – one that begins modestly in the small North Carolina town of Oxford where he was born.  His family moved away from the state for a while to South Carolina and Georgia before eventually coming back and settling in for good in the heart of Moore County in 1971.

Dr. Murphy is the son of the late Bob Murphy, a talented musician and performer who along with his offspring performed professionally at Pinehurst Resort (as well as other venues) for more than 30 years.

Dr. Murphy recalls those days after school having to go to his dad’s music store (Murphy’s Music Center, which originated in Aberdeen then moved to downtown Southern Pines and was the first of its kind in Moore County) and having to help out. In eighth grade, he first met his would-be wife Sharon when she was attending the rival middle school in Aberdeen. Years later, they got married and have passed on musical and theatrical talent to their four children: Kent, Drake, Anna and Greene.  All are accomplished musicians and are often requested to perform together locally.

A graduate of Pinecrest High School in 1979, Dr. Murphy went on to graduate from Perkins School of Piano Tuning and Technology in Ohio in 1980 and UNC Chapel Hill in 1991 receiving a Bachelor of Arts in Music Theory and Composition. In 2000, he earned a Master of Divinity from Duke Divinity School and a Doctor of Ministry from Hood Theological Seminary in 2011.

Today, Dr. Murphy is rooted in the Moore County community. He is the current pastor of Trinity A.M.E. Zion Church in Southern Pines and has been pianist at Pinehurst Resort since 1983.  Dr. Murphy also serves on the boards of The Boys and Girls Club, Moore Health, Sandhills Cooperation Association, Moore Montessori School and is a member of the Southern Pines Town Council. 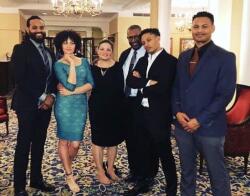 To add to his extensive resume, he has served as a missionary in the U.S. Virgin Islands, South Africa and Zimbabwe.  He was a paratrooper in the 82nd Airborne Division of the U.S. Army.  He taught music at several schools throughout Moore County, was the K-5 Assistant Principal of the Sandhills Theatre Arts Renaissance School (STARS) in Vass, and has composed original music.

Dr. Murphy now looks back across the constantly progressing Moore County landscape that in his words played a big part in his development.

When asked out of all of his outstanding achievements what he would consider his greatest one, Dr. Murphy seemed at a loss.“It is truly the most incredible place to raise a family,” said Dr. Murphy, whose mother Thomasina has also played a big part in his success. “With the changing demographic– it is becoming less of a retirement community – there are new insights and ideas being shared everywhere. With more young families moving in [including those from the military], there are new activities and other options being created for younger people. The conversation among different parts of the community is happening and that is only going to continue to create some stronger business opportunities both at home and abroad.”

“I guess when I think about some of the opportunities I’ve had in my life, it is a bit mind boggling,” he said. “But I actually see the music and the ministry as being in concert with one and other.”

The positive effect of the things his parents directed him to during his childhood growing up in Moore County really didn’t strike Dr. Murphy until much later.

“I always enjoyed music, loved it,” he concluded. “But I never realized the significance of the foundations my parents were providing me back then. I was just a kid playing the clarinet, even if I was touring and traveling all around the state doing it. I just thought ‘well, this is another thing my father has me doing’. But I will always know they had my best interest in mind.”

And as for his beloved Moore County community and his role in it, Dr. Murphy seems to have its best interest in mind as well.