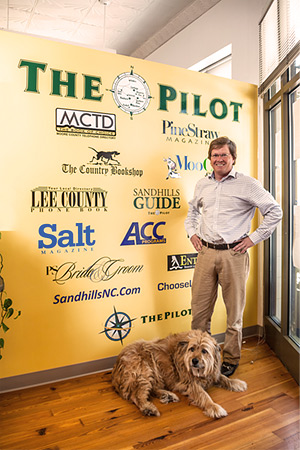 Just six years out of college, David Woronoff was well into a promising magazine career in Charlotte when an opportunity arose at The Pilot in Southern Pines. It was the mid-1990s and the storied newspaper was searching for new leadership. Woronoff was so unfamiliar with Moore County that he had to consult a map to be able to find his way there.

“I had been to Pinehurst for a couple of business meetings at the resort but hadn’t really had a chance to take a look around,” says Woronoff, who grew up in Greenville, N.C. But it didn’t take long for the couple to decide the community would make an ideal backdrop for their young family.

“When folks say they live in a small town, a lot of times that has a negative connotation,” Woronoff says. And with its quaint charm and manageable pace, Moore County communities exemplify – even celebrate – their small-town ways. But its hospitableness to newcomers provides a constant renewal of ideas and energy. “Because people here are from everywhere, you have a cosmopolitan feel that keeps it vital, vibrant and stimulating,” he says. “We may be a small town, but that doesn’t mean we’re small time.”

Since taking over as publisher of The Pilot in 1996, Woronoff has transformed the company from a local print publisher into a 21st Century media company, with monthly magazines stretching from Wilmington to Greensboro and a go-to key Internet resource for the community. The Pilot continues to gather both statewide and national accolades for the quality of its journalism.

Woronoff believes Moore County’s unique civic spirit is what sets it apart. “It’s always been a collection of small businesses and individuals who believed in getting involved,” he explains. “That community-minded ethos is palpable.” In the years since moving to the county, Woronoff has chaired the chamber of commerce, the United Way and the Boys & Girls Clubs. He helped found the local economic development partnership, got active in the local English-Speaking Union chapter and served as vice-chairman of FirstHealth Moore Regional Hospital. “The ability to affect positive change was something I really wanted to do here,” he says.

And leaders here have a willingness to commit financial resources as well as their time in service to the community, Woronoff says. Sandhills Community College, North Carolina’s first community college, enjoys an endowment of some $20 million. The endowment fund at FirstHealth Moore Regional Hospital tops $250 million. “The relative wealth of our community has been invested in these institutions, and they in turn have invested that wealth in their operations,” Woronoff says.

When not working or engaged in voluntary leadership, Woronoff stays busy with a steady regimen of outdoor recreation. “I play a lot of tennis,” he says. “That’s my number one activity.” There is also golf; Moore County is home to no fewer than 43 golf courses. Bass fishing is another way Woronoff enjoys his time off.

The popularity of the Pinehurst resort as a destination for both business and family tourists means Woronoff, who lives nearby at the Country Club of North Carolina, gets to visit with many distant buddies regularly passing through. “I have a lot of old friends who come to town,” he says.

As for his own travels, Woronoff says Moore County’s central location makes it easy to drive to the places he likes. Downtown Raleigh, where daughter Freddie attends boarding school, is about 75 minutes away. So too is Greensboro, where The Pilot publishes O.Henry Magazine. Both Charlotte-Douglas International Airport, and his family beach home in Wilmington can be reached by a quick two-hour ride—though they’re in opposite directions. And a visit to daughter Jenna, an undergraduate at Appalachian State University in Boone, takes just three hours. “The convenient location really helps,” he says.

Not that there isn’t a thick calendar of events keeping Woronoff busy back home. He rattles off a list of community and business events underway, not to mention two high-profile golf tournaments set to take place in Pinehurst soon. “When you throw in two U.S. Opens, there’s a lot going on here.”

Our area Convention & Visitors Bureau posted this great article written through the fresh eyes of someone who recently visited Moore County for the first time.  While it may be geared toward giving visitors a sense of what Moore County is like, the article is really not just for visitors.  It’s also for residents – newcomers and established folks alike – who may ... Read More »