Moore County has 2 great venues for seeing movies – a multiplex that is newly-renovated and an arts center that has stood the test of time.

Paragon Sandhills in Southern Pines is Moore County’s only multiplex and houses 10 screens.  It opened in December 2000 as Sandhills Cinemas and had fallen into disrepair since 2015 under 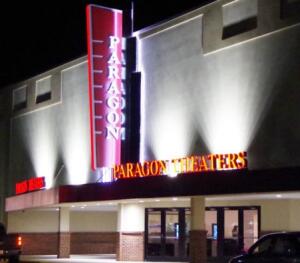 the previous ownership.  In late 2018, Florida-based Paragon Theaters acquired the theater and undertook an extensive remodeling project which lasted nine months and cost approximately $3 million.  The transformation is quite impressive.

A ribbon-cutting ceremony in January revealed the improvements which include digital sound and Sony 4K projection, the installation of luxury leather recliners, an upgraded lobby with large touchscreen ticketing kiosks, an updated concession stand with expanded food selections, and renovated restrooms, common areas and parking lot. Ticket purchases, in addition to reserved seating, can now be done online. Beer and wine sales will be coming soon.

The electric leather reclining seats, complete with footrest, and generous 8 foot spacing between rows means no more climbing over people to get to a seat.

Formed in 2009, privately-held Paragon Theaters boasts an impressive track record of acquiring older theaters and turning them into state-of-the-art facilities with upscale amenities, all while maintaining affordable ticket prices for the public.  In fact, according to a Moore County resident whose daughter lives in New York City, the daughter has been to a movie at Paragon Sandhills and said the reclining seats were like those at her movie theater in New York.  Moore County may have a small-town feel, but we have big-city amenities!

Forty people now work at Paragon Sandhills, and they are currently hiring for a variety of positions. Interested job applicants should stop in and ask to speak with the manager.

As this multiplex begins a new era of entertainment for Sandhills residents, Moore County has another movie-going destination that has a long history as a cornerstone of arts and entertainment in the Sandhills.

The Sunrise Theater in downtown Southern Pines was originally built as a hardware store in 1898, eventually becoming a movie theater, “The Sunrise”, in the 1940s.  It remained a theater until the 1980s when it was in jeopardy of being demolished.  Citizens rallied to save the building, raising enough funds to purchase the building and renovate it into a performing arts center. 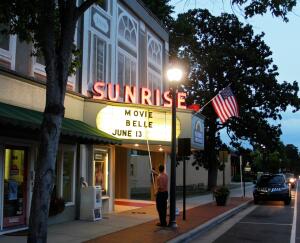 With first-run and independent films running weekly, in addition to musical concerts, live broadcasts of the Met opera, and live community theater, today The Sunrise Theater is a thriving center of entertainment and a preserved piece of Moore County’s history.

Residents are truly fortunate to have both venues that are part of Moore County’s diverse and vibrant cultural scene.