After studying  nuclear and mechanical engineering at  NC State University in the 1970s, Kent Misegades has spent much of his career working in Germany in industry.  In the mid-1990s while working at an engineering company near Frankfurt, Germany, Kent was asked to return to the U.S. to run a company that some former colleagues had started in the Research Triangle Park.  He and his wife Ulli, a native of Germany, moved to Cary and over the years became familiar with Moore County because of its close proximity to the Triangle area.

“Over the past 20 years we have come to learn about and fall in love with the region,” Kent said.  “We like Southern Pines, Aberdeen and Pinehurst as they remind us of the small towns we grew up in here in the South and in Germany.  We are country people and prefer rural communities over big cities.” 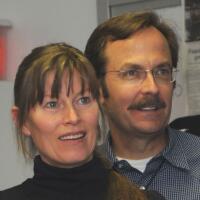 Ulli has ties to Moore County through her membership in the Arts Council of Moore County and the Artists League of the Sandhills.  A self-taught artist, she specializes in watercolor and pastel mediums and has won many local awards.

“When my parents were ready to retire, they lived in Florida but weren’t happy there so I suggested they visit Southern Pines. They fell in love with it and built a home in Longleaf (the neighborhood surrounding Longleaf Country Club) in 1998,            Kent & Ulli Misegades    and it was one of the best moves in their lives,” Kent said.

While Kent was working with a Swiss company that has a major office in Cary, he learned that one of their suppliers, Reitz Fans of Hoexter, Germany, was looking for someone to open a U.S. office.  He jumped at the opportunity.  Reitz supplies powerful centrifugal fans that are critical for the production of many products including bricks, steel, pharmaceuticals, and even breakfast cereal.  Some are as large as a small house.

“Because my mother still lives in Longleaf and I like the area so much, we were attracted to Moore County as the location for the new manufacturing business, Reitz Fan & Blower Inc.  It helps that our CEO, Mr. Ulrich Breder, is an excellent golfer and was impressed by the community when he visited this past spring.  We have been welcomed with open arms and are working closely with Partners in Progress, Moore County’s economic development organization.  We will soon be opening a small office in downtown Pinehurst, and anticipate that we will start producing our industrial fans in a manufacturing facility here by next summer. While our employment needs will be very modest in the first few years, we see great potential for steady growth in the future.”

Kent cites several other reasons for choosing Moore County as a business location:

Kent adds, “On a personal note, Moore County has a great aviation community at the Moore County and Carthage airfields.  Roland Gilliam is a friend of mine and I have known many of the local pilots for many years.  As a pilot since the 1970s, I expect to use private aircraft often for business.”  (Mr. Gilliam is owner of the Gilliam-McConnell Airfield in Carthage opened in 1994.) 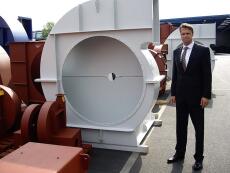