A single stoplight is all that separates Ray Washington from the work he loves. The Pinehurst resident spends a grand total of six minutes commuting to and from Pinehurst Surgical, where he practices general and bariatric surgery.

“It’s a far cry from living in Philadelphia,” says Dr. Washington, who was an academic standout at St. Joseph’s University while also the starting point guard for the Hawks’ basketball team. His wife, Toni Anne, is a Philadelphia native who now is an anesthesiologist at Moore Regional, practicing in the same building.

After graduation from St. Joe’s, it was on to the Medical College of Virginia in Richmond and a residency at Christiana Care Hospitals in Delaware. In 2001, the couple weighed options on a community in which to lay down personal and professional roots. “We planned on starting a family, and it seemed to us we should be in Moore County rather than Philly or some larger city,” says Dr. Washington, who grew up in Hampton, Virginia. Upon his first-ever visit to Pinehurst, he instantly knew where he wanted to be. “I fell in love with this place,” he says.

Since moving to Pinehurst, the Washington’s have added a son and daughter to the family. A range of high-quality public and private schools provides educational choices. Both Jackson and Mia have attended the Episcopal Day School (EDS), a PreK-5 school in Southern Pines. “EDS has been phenomenal about teaching good values in addition to solid academics,” says Dr. Washington. “The technology is there and the teachers are great.” He has also been impressed by New Century Middle School, which Jackson now attends. “He loves it.” 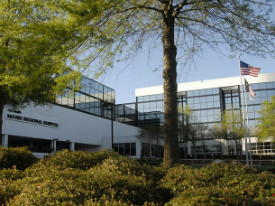 At work, Dr. Washington beams as he talks about two facets of his professional life that have exceeded all expectations: the hospital and its patients. “Most small towns have small hospitals,” he says. Not true for Moore Regional, which offers a full complement of high-quality primary and specialty medical services. His patients, drawn from across North Carolina’s Sandhills, are thoughtful and kind. “They’re a pleasure to take care of,” he says.

When not attending to his duties at the hospital, Dr. Washington coaches Jackson’s basketball team—both kids are avid basketball, lacrosse and soccer players—and he is active in the Boys & Girls Clubs of the Sandhills, even serving a term as the organization’s president. Summers are spent waterskiing at Baden Lake, less than an hour’s drive from Pinehurst, where the family has a summer getaway.

The recent expansion at nearby Fort Bragg has brought a wave of young people and families to Pinehurst, one of the changes he’s seen here since arriving in 2001. “There’s definitely been population growth.” In their wake, new businesses have opened—national retailers, for example, now provide shopping experiences that once required treks to metro areas.

Despite its residential and commercial growth of late, Moore County remains the perfect size for Dr. Washington and his family. “It’s been ideal,” he says.