In a little more than 60 days, the population of Rockingham in neighboring Richmond County will surge tenfold, from 9,558 to around 90,000 when Epicenter, a three-day musical festival set for May 10-12 at the Rockingham Festival Grounds, comes to town.

Epicenter replaces Carolina Rebellion which was held in Charlotte from 2011 to 2018. Los Angeles-based production company Danny Wimmer Presents (DWP) has signed a 10-year contract to deliver the festival in Richmond County — expected to be the largest event ever held in Rockingham. 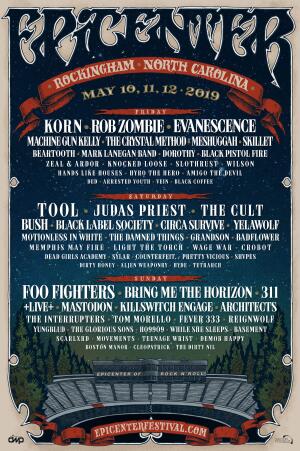 DWP will transform the 550-acre festival grounds that encompass both the Rockingham Speedway (“The Rock”) and Rockingham Dragway into multiple concert stages, food and other entertainment areas, and plenty of onsite parking and camping.  Festival producer Danny Wimmer said the creation of Epicenter in the heart of North Carolina provides the ability to expand on the festival experience with enhanced camping amenities, nighttime entertainment with no curfew, and through expanded food and beverage offerings.

Seventy bands are lined up to perform.  Judas Priest, a British heavy metal band that has sold around 50 million albums worldwide over a five-decade career, will be joined by Foo Fighters, Korn, Evanescence, Tool, Bush, Rob Zombie, and many other heavy metal and alternative rock bands.

“DWP wants to set a great foundation for this event, particularly when looking at a 10-year contract,” said Rockingham Dragway owner Steve Earwood. “By far this is the largest event we’ve had in the Sandhills and it will have a tremendous economic impact on everybody.”

In Moore County and other surrounding counties, large blocks of hotel rooms are ready to house the festival-goers.  “We have about 2,500 hotel room nights blocked off for this event,” said Beverly Stewart, executive vice president of the Convention and Visitors Bureau of Pinehurst, Southern Pines, Aberdeen.

Epicenter won’t be the first time that a rock concert or other events have been staged at the Dragway.  Lollapalooza in 1996 showcased the band Metallica and was followed by other major rock festivals in 2000 and 2012.  The Dragway’s calendar still includes many racing events, despite the fact that NASCAR races at The Rock were discontinued in 2004, as well as non-racing events such as the Rugged Maniac, a national, annual extreme sports circuit featuring a 3-mile obstacle course with lots of mud.  This year’s Rugged Maniac in Rockingham will be held on May 18th.

“We need Epicenter to be a success and we’re doing our best to make sure all the i’s are dotted and we’ve crossed our t’s,” said Martie Butler, Richmond County's economic developer.  Pat Corso, Executive Director of Moore County Partners in Progress added, “As a community, we will do all we can to make sure this is a great success for Richmond County and the region.”

For more information about Epicenter or to purchase tickets, visit www.epicenterfestival.com.  (Original story by Laura Douglass in The Pilot 3/6/19)