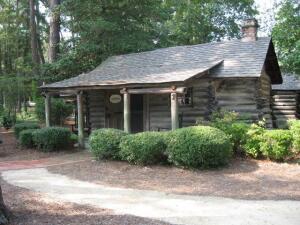 Most folks just know it as the cabin.

Crafted without nails in 1810, the "one-room" cabin is the official Pinehurst welcome center and home to the Sandhills Woman's Exchange, one of 19 remaining in the United States.

Once there were 97 in an era when isolated farm wives could earn extra money by selling their handmade items through co-ops. Today, the Sandhills Exchange is both the smallest and the only one to offer lunch, a menu of sandwiches, salads, soups and homemade desserts, served by volunteers since Jan. 15, 1957.

President Karen Lehto moved around the country with her Army husband, living in such places as Texas, New York and Hawaii before settling in Moore County. She says she feels a special kinship with the cabin because men from her own family have fought in every American conflict since the Revolution, as the cabin has stood through countless crises.

It was built at Ray's Grist Mill just northeast of Pinehurst. After the Civil War, Archibald McKenzie bought it and used it as a kitchen. In 1895, Pinehurst founder James W. Tufts acquired it and moved it to its Azalea Road where it sits across from the Village Chapel. It became a curiosity, displaying a few old household items for his Northern guests. Former slaves lived in it, and tame deer came there to feed. In 1923, Tufts gave the vacant cabin to the newly fledged Sandhills Woman's Exchange. The cabin is on the National Register of Historic Places.

Most folks come for the lunch, especially the homemade soups like split pea, lobster bisque and the popular chili.  Volunteers and Debbie Ewing, the cook and only full-time employee, serve lunch Tuesdays through Saturdays.  Volunteers are loyal, including 94-year-old Betty Hogg who has helped out at the Exchange for 45 years.  Helping women in need by providing a place for them to sell their crafts, the showroom is open on the same days from 10 a.m. to 3 p.m.

A beef hot dog with chili, cheese and trimmings is named for the late Mayor George P. Lane, who was a tireless promoter of the Exchange and loved to eat lunch there. It was his idea to create a village welcome center in the cabin in 2010.

Lehto has volunteered for five years and admits to having a soft spot for the Exchange.  "Everyone here has a passion for the cabin."

From a story by Sara Lindau, Elite Magazine, 2013