Developer Blaine East shared new details about his ambitious plan for Little River Resort with the Carthage Board of Commissioners on Wednesday.

The Apex businessman has spearheaded several commercial projects in Moore County over the years, including the Southern Pines shopping center currently anchored by Kohl’s on Brucewood Road. East told the commissioners that Little River, which he and his associates bought in March, will be one of his largest ventures to date.

“I’m going to leave this as my legacy,” he said.

A medical complex, shopping plaza, winery and celebrity chef-affiliated restaurant are among the attractions East hopes to place on the 585-acre property. Parts of the concept are similar to a mixed-use development that East pitched to Pinehurst leaders in 2014 — a project that never materialized.

“This is going to be one of the biggest revenue-generators that the town has ever seen, and probably the county other than the hospital and Pinehurst Resort,” East said of Little River. “This is a catalyst that we’ve never had before in the town of Carthage.”

East said he plans to collect letters of intent from businesses interested in leasing space at the resort. Possible tenants named during the meeting include Tommy Bahama, Coach and Lululemon.

“My background is in shopping centers,” said East, adding that he has developed about 100 centers “from Florida to Texas” over the past 35 years. “We’ve gone back to those tenants and said ‘guys, we want you in our project, but we want you as (smaller) resort stores.’”

The developer said he has been in talks with NASCAR magnate Richard Childress to open a winery at the resort. East also teased a new restaurant by celebrity chef Robert Irvine.

“We flew Robert to the site and spent a weekend with him,” East said of the chef, who is perhaps best known as the host of Food Network’s “Restaurant: Impossible.” “He said ‘I don’t want to just give you a restaurant, I want to give you a (television) production studio.’” 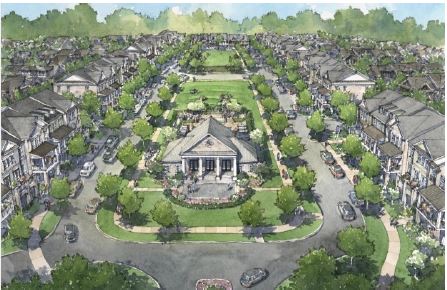 Meritage Homes, an Arizona-based construction company, has been contracted to build a number of single-family houses at Little River. East said the homes would not be “entry-level.” Prices are expected to start at about $450,000, which is $126,000 higher than the average cost of a new home in Moore County, according to the Mid-Carolina Regional Association of Realtors.

“We think there’s a great market for that here,” East said. “We feel like there’s a niche in the market where we can provide some great home sites on golf courses and lakes.”

The most dramatic addition to the property would be a proposed $300 million medical complex. East previously told the commissioners that the complex would be associated with Dr. Charles Richardson, the co-founder of a company that makes medical devices.

East said he plans to renovate the golf course, a project that could cost about $1.6 million.

The three commissioners present during Wednesday’s meeting said they supported East’s plans for the property, but the board did not officially vote on the concept. Tom Robinson, manager of the town, said East must still provide the board with a master-site plan.

Our area Convention & Visitors Bureau posted this great article written through the fresh eyes of someone who recently visited Moore County for the first time.  While it may be geared toward giving visitors a sense of what Moore County is like, the article is really not just for visitors.  It’s also for residents – newcomers and established folks alike – who may ... Read More »