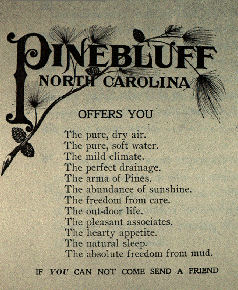 John T. Patrick, who bought the acreage that became the Town of Southern Pines, also bought 772 acres in 1884 that became the Town of Pinebluff.  Patrick designed the layout of the town on a rectangular grid of streets and blocks, giving the east-west avenues names such as Chicago, Baltimore, Philadelphia, New England, and Boston because these were the areas from which he hoped to attract settlers.  He advertised in newspapers and published brochures extolling the terrain, the climate, and the healthful advantages of the pine-scented air, in hopes that the area would become a "healthful" winter resort for Northerners.

Incorporated in 1899, Pinebluff never evolved into the resort community Patrick had hoped. Today the Town is a tranquil, primarily residential area.

Major industries that are thriving in Pinebluff include: 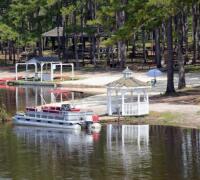 There is freshly poured white sand on the beach and nostalgia is in the air at Cardinal Park, a newly reopened recreational facility in Pinebluff that h… Learn More »